A New Year, A New Life 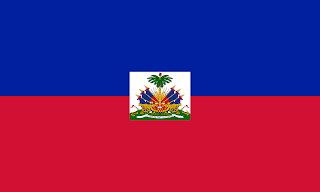 In the last month that I haven't posted, my life took a dramatic turn. The flag is Haiti's flag and in approximately 5 months, Port Au Prince will be my new home. My husband has been working to join the foreign service for several years and on January 6th, the call came that he would start his new career the following Monday. I did not leave with him on that Monday but spent four weeks "packing up" our life in Cody, Wyoming. Now, we are all together in the metropolitan area of Washington, D.C.

Friday the twelfth of February, we found out our first post as a foreign service family. The ceremony is Flag Day. A country is called, its flag appears on the large screens, and then the name of the person going to that country. My husband was one of the last one's called and we both were thinking that we would be learning Spanish since most of the posts for his class were in Mexico. We are going to be learning Haitian Creole instead.

I suspect writing will be curtailed here and there, and Miss Winsome's next adventure is on hold. I'm still hopeful to get her next two adventures out this year. Who knows, Miss Winsome might need to have an adventure or two in Haiti. Once life is a little less hectic, there will be more flash fiction and snippets from my novels in progress.