The Limits Of Our Imperfection

For this terribleminds challenge, the title, first and last line were provided.

Deep inside the twisting wood, there is a house, in a gully. I spotted it, just a flash of it while descending far too quickly for my skill level along a deer trail desperately trying to keep up with boy mountain bikers. Keith convinced me it was a perfect first date. We’d met at a trailhead.
My girlfriends and I enjoying the afterglow of our weekly ride with Susan’s latest perfectly brewed white ale when Keith and his friends arrived. It was a typical trailhead meeting with the comparing of gear, info about trail conditions, and admiration of home brew. Keith was a flirt and most likely a collector of phone numbers. I didn’t expect a call.
There I was cursing through the woods, a million tiny scratches on my arms and legs from following a barely visible trail through heavy undergrowth, and reaching the end of the ride just when the last beer was about to be opened by Keith, my date.
He reluctantly handed it to me, “What did you think? It has hidden trail potential. Right? Cept for that last bit. Totally sketchy last mile or so.”
In the last effort to look cool before my date and not terrorized by every inch of their non-existent trail, I slugged down the entire beer. I didn’t know the whole crew was watching me. They hooted and hollered when the last drop hit my tongue.
Did this mean I was in? Was in the club? I didn’t want in. I wanted to throw a girly hissy fit. In my mind I was yelling at Keith - you dodo brain, this is a terrible first date. I’m miserable. I’m scratched head to toe, sweating, and stinky. My hair's a mess. And, at the moment, I hate you. All I want now is a shower and my bed. Not you. Not one bit. Though even the tips of my toes knew the whole ordeal was awesome and after the scratches didn’t sting in the shower I would want to do it again. And I would, alone. I wanted to check out the house in the gully.
Keith and his buddies were trail warriors. I became addicted to the animal trails they discovered and even brought Ashley to have someone a bit slower than me. It was a full month before I went back to find the house.
I brought my bike though I ended up pushing it more than riding it. Shoving it up a steep section while scanning the hillside, ignoring the wild rose vines licking at my legs, my mind kept thinking, “This is the wrong hill. It's been too long.”
I kept going until there was a break in the woods and an area of grass. It wasn’t as steep either.  It was memorable and where I thought of stopping on the ride but then seeing the tail end of Keith’s bike go back into the woods, I kept going not wanting to get lost. This had to be the hill.
Leaning my bike against a tree, I walked slowly back down the hill. There, a spot of sun glinted of something smooth and reflective and not visible from the other direction. I hadn’t been delusional from exhaustion.
I dug out my carefully wrapped camera from my backpack and took a few quick pictures of the surroundings. Then, stepped toward the house wondering how old it was and how it got to be in that position on this steep hill.
My foot snagged an entanglement of rose vines and I was falling forward.  My right-hand lets go of the camera and I tried to stop my forward momentum. The steepness was relentless so I tucked my head and hoped for a soft landing in the gully. The fall didn’t stop.
And then.
Silence blanketed the meadow.

Time For Tea And Treachery 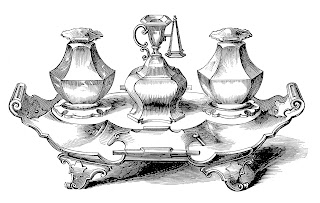 Yeah, my title was randomly chosen for this weeks terribleminds challenge so I used it. I have added to an old Yggdrasil story.


Time For Tea And Treachery
The week passed by slowly since Yggdrasil challenged Nanna to a tea biscuit duel. Nanna, obviously bragging, brought out her dress during a tea hosted by the three Fates. It was the same design and cloth as Yggdrasil’s dress that she’d kept a secret.

The Fates conclude that it's Nanna’s destiny to wear the gown to the Höðr ball. Yggdrasil irritated, takes a deep breath and extinguishes the fireball she wanted to throw at the copied dress. Before an argument ensues, Yggdrasil challenges Nanna to a duel.

"Aiger, is my parasol complete? The tea duel is tomorrow and I should practice with it," says Yggdrasil.

"It's the fifteen minutes. The workings are precise up to nine minutes though they work best at three. Every time I push the mechanism to eleven or above there is a noticeable shimmering and a golden red leaf ..."

"Yes, yes enough with your nonsense. Nine minutes is plenty and perhaps three minutes," her voice quiets for this last bit, "for tea biscuit duel disintegration."

He peers over his multi-lensed goggles. "You know the significance of a red leaf, of course. This is something, I believe, that needs to be reported to the Council of Time Manipulations and studied further. I cannot let this item be in use by anyone who has not gone through the proper time manipulation training. Even your request for an altered parasol should have been..."

"Yes, yes, you discussed at length all the regulations when I brought the parasol to be changed," she air quotes around the word changed. "Do I need to remind you about our agreement." She places a gold coin in the brass dish.

"Your patronage is welcome, Yggdrasil." He straightens from his typical working hunch and points to a lever. "It is a simple gadget and by setting this lever that has fifteen positions. Please, I beg you, don't set it beyond nine minutes."

"Then, push the stone at the base of the handle. As requested, the user of the parasol is not affected. Time will stop for everyone and everything for a fifty-foot radius. I must also say..."

Yggdrasil grabs the object, walks out of the workshop admiring the Petra stone her grandfather gave her. She sighs happily not to hear the contraption master issue any more warnings and not wanting to give him time to change his mind.

The crowd hesitates in their applause. Nanna, a five-year champion of Aphrodite's Annual Tea Duel competitions, lost. The goddesses sitting on Yggdrasil’s side applaud.

The hall’s doors open with a crash and a man, with a perfectly tied cravat, enters. “Yggdrasil cheated. Her parasol contains a time-turning contraption!”

“How dare you…” begins Yggdrasil, placing her thumb on the Petra stone on her parasol.

The Tiffen Master reacts too slowly. Yggdrasil presses the stone.

She wobbles the biscuit in her hand. It splashes on her cup and the table.

Yggdrasil points her parasol at the man’s cravat and says, “And, I’m stuck wearing yellow.” She storms from the hall, smiles, and hatches another plan to thwart Nanna.

Trip to Paris and Amsterdam

Here are a few pictures from my recent trip. Steampunk is easily spotted when the Victorian Era leaves a mark and Amsterdam has a certain feeling about it.